Grosse Ile, MI – June 2, 2009—While the brutal battles of a war that threatened to destroy our nation took place hundreds of miles away, much of the blood shed, lives lost, displays of valor, and victorious maneuvers belong to the people from southeast Michigan.

“It’s believed President Abraham Lincoln proclaimed ‘Thank God for Michigan’ when the First Michigan Infantry arrived in Washington DC shortly after the president’s declaration of war,” says Karin Risko, Hometown History Tours founder and tour organizer. “The First Michigan, made up of men from Detroit and other Michigan cities, was the first western unit to answer his call.

“Our people fought hard and sacrificed much. Their actions significantly contributed to the outcome we enjoy today – a united nation – the United States of America.  The people of Michigan should know that and be proud.”

Designed to appeal to locals as well as out-of-town tourists, the Glory, Valor & Sacrifice bus tour traverses a historic trail created by linking together local museum exhibits, monuments, markers, forgotten landmarks and cemeteries centered around the Civil War. The trail spans from Monroe to Detroit.

The first stop on the tour is the Battle Flag of Company E First Michigan Cavalry exhibit at the Dearborn Historical Museum. Carried by Sergeant Thomas Henry Sheppard, the flag survived 16 months of war and 13 major battles.  Wounded at the Battle of Gettysburg, Sheppard was captured and sent to the infamous Andersonville, Georgia prison where he and other Union soldiers endured horrific conditions. Throughout his imprisonment, Sheppard managed to safely conceal the precious regimental flag that bears 72 bullet holes.

Other stops include: Elmwood, Woodmere and Woodland Cemeteries, the final resting places for hundreds of Civil War soldiers including famous generals and medal of honor recipients as well as prominent politicians of that era. Additional stops are Fort Wayne and Campus Martius Park, the center of several Civil War gatherings and current home of the Soldiers and Sailors monument and historical marker dedicated to the famous Michigan Iron Brigade.

“This tour is dedicated to the memory Colonel Brodhead,” says Risko, who resides on Grosse Ile.

Brodhead, who served the State of Michigan in many capacities including state senator, was owner and editor of the Democratic Free Press, a forerunner of the Detroit Free Press. Commissioned to lead the First Michigan Cavalry, Brodhead was mortally wounded during the Battle of Bull Run.

“One day, I came across the poignant farewell letter he wrote to his wife and family on his deathbed. He wrote: ‘I hope that from heaven I may see the glorious old Flag waive again over the individual Union I have loved so well. Farewell wife and Babes and Friends. We shall meet again. Your loving Thornton.’ I was really moved by that letter and never forgot those words.”

A local Civil War tour wouldn’t be complete without a visit to Monroe, the hometown of General Norman Hall who saw battle at both Fort Sumter and Gettysburg and several other generals of significance. Monroe is also the adopted hometown of General George Armstrong Custer, the youngest Union general to serve in the Civil War.

While Custer’s legacy is overshadowed by his defeat at the Battle of the Little Big Horn, most people don’t realize Custer was a celebrated Civil War hero.  As commander of the acclaimed Michigan Cavalry Brigade, Custer rallied his men with the famous cry: “C’mon you Wolverines!”

The Michigan Cavalry Brigade was instrumental in thwarting numerous Confederate advances and participated in many critical campaigns that helped secure Union victory. At the end of the war, Major General Phil Sheridan acknowledged Custer’s significant contributions by presenting his wife Libbie with the writing table where the terms of the Confederate surrender were signed.

An accompanying note stated: “And permit me to say Madam that there is scarcely an individual in our service who had contributed more to bring about this desirable result than your very gallant husband.”

A replica of the table is on exhibit at the Monroe County Historical Museum along with the one of the largest Custer exhibits in the nation. The original table is at the Smithsonian. 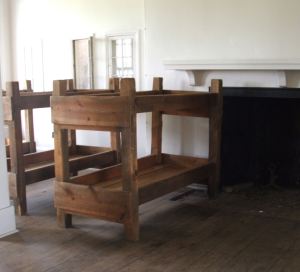 A trio of Civil war experts, David Finney, of Howell, Dave Ingall, of Temperance, and Steve Alexander, of Monroe, will be on board and serve as guest narrators on the tour. They’ll recount the brave and often tragic stories behind the local people, places and events that shaped our history. They’ll also share humorous anecdotes with tour goers such as one general’s innovative but not-so-popular solution to ridding his camp of venereal disease.

Finney, a United States Army veteran, is a retired, award-winning educator who has served as a historical commentator for several Civil War film documentaries and battle commentator at the annual Cascades Civil War Muster in Jackson, Michigan. A member and officer of many historical organizations, Finney is a sought-after speaker and has given hundreds of Civil War presentations to Civil War round tables, historical and genealogical societies and professional organizations.

Ingall is the assistant director of the Monroe County Historical Museum. He’s visited almost every major Civil War battlefield and has conducted exhaustive research on the soldiers from Monroe County as well as his 20 relatives who fought in the Civil War. A member of numerous historic and preservation organizations, Ingall’s passion for history provides for informative and entertaining museum tours. He’s also in demand as a speaker by various educational and historical organizations.

Steve Alexander portrays the flamboyant yet celebrated Civil War General George Armstrong Custer. Proclaimed by the United States Congress as the “foremost Custer living historian,” Alexander has appeared as the General in over 20 television docudramas featured on the Arts & Entertainment, Discovery and History channels. Both the Michigan and Ohio Senates have acknowledged him for his lifetime work and portrayal of America’s most controversial military leader.

Promoting Regional Tourism / Getting A Jump on the Sesquicentennial

“This tour is unique,” says Risko. “First, no one really thinks of our region in regards to Civil War history. With the Civil War Sesquicentennial in 2011, it’s not too early to start educating people about our storied past and actively promoting it.

“Second, Hometown History Tours has created a regional approach to promoting our area’s history. While someone may have an interest in seeing the Battle Flag of Company E at the Dearborn Historical Museum, are they really going to drive very far to see just that? Once people discover that within a few miles they can see numerous sites related to the Civil War such as the chair President Lincoln was seated in when assassinated, the Trevilian Station exhibit featuring Custer’s captured belongings that was lost for over 135 years or an authentic look inside the soldiers’ cramped quarters at a major fort, interest becomes greater. By linking regional Civil War exhibits, markers and sites of interest, we’ve created a destination – one that people will want to visit for a day or several days.”

Ticket price for the June 13th tour is $125 per person or $112 per person for groups of four or more. Tickets must be purchased in advance by calling 734.642.5712 or online at: www.hometownhistorytours.com.

Bus departs at 8 AM from Value City Furniture parking lot in Taylor and returns at 7 PM. The parking lot is located on the southeast corner of Eureka Road and Telegraph.

1) Elmwood Cemetery. Joseph Keen served in company D, 13th Michigan Infantry at Detroit. Wounded and taken prisoner at Chickamauga, Georgia, Keen was confined to three Confederate prisons before escaping. Upon escape, he came across General Hood’s forces consisting of 40,000 Confederate Soldiers crossing the Chatahoochee River to flank Sherman’s army in the rear. Keen boldly walked through the Confederate marching columns, camps and pickets and reached Union lines near Atlanta. Keen was awarded with the Congressional Medal of Honor on July 31, 1899 for carrying and reporting information on enemy troop movements.

2) Remnants of the Grosse Ile office of Colonel Thornton Fleming Brodhead still stand. Brodhead was mortally wounded at the Battle of Bull Run.

3) Fort Wayne served as a training station for new recruits. A room in the soldiers’ barracks is set up to reflect period conditions.