While you’ll see a few brave souls battling the elements during inclement weather, during warm weather months, Detroiters – on bikes – hit the streets en masse. Cycling in the city on bike isn’t a new phenomena. An affinity for two-wheeled transportation dates back to the 19th century. 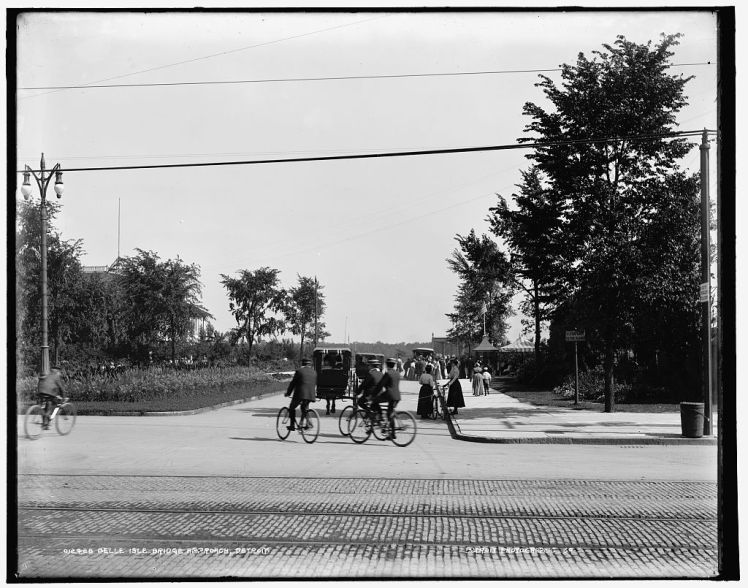 The Detroit Bicycle Club was formed in 1879 with 20 members and no clubhouse, at a time when few people rode bikes in Detroit.  Highwheeler bicycles, bikes with a large front wheel and small back wheel, were used until 1885, when the safety bicycle was invented.  Safety bicycles were designed much like today’s bike as biking began to grow as a means of transportation across the United States and Europe.  Approximately 75% of the residents of Detroit rode bikes during this time.  Where bicycles had primarily appealed to young adventurous men, they now became popular

In 1886, the club helped to host a state bicycle meet, membership began to grow, and the club started renting a clubhouse on Miami Avenue by Wilcox street.  Eleven years after the Detroit Bicycle Club formed, the group merged with two others; the Star and Meteor Bicycle Clubs, to become the Detroit Wheelmen.  That same year, 125 members rode over 300 miles to the League of American Wheelmen Convention at Niagara Falls in Canada.

In 1892, W.C. Rands of Detroit set a record when he rode 25 miles in one hour and fifteen minutes in Belle Isle Park.  A year later, the clubhouse was moved to Randolph street where another record was set; W.B. Hulburt rode the Belle Isle race in one hour, eleven minutes and 59 seconds.  The following year, W.W. Grant won in one hour, 26 minutes and 30 seconds.  The last road race hosted by the club was held the following year, also in Belle Isle, and A. Callahan from Buffalo won with a time of one hour, seven minutes, and 48.8 seconds.  Within the club, several famous Wheelmen emerged, including Edward Hines, Tom Cooper, Truman Newberry, William Metzger, and John and Horace Dodge.

By 1896, the club had 450 members and wanted to build a clubhouse near Grand Circus Park.  In order to raise the money, the club held an indoor winter circus, raising over $3,700 and gained a reputation as the greatest show on earth.  The Detroit Shriners, seeing the success of the Wheelmen, created their own show which is now known across the United States.

The clubhouse was built at 53 E. Adams, costing $40,000.  It had three stories and a basement, was made from stone and brick, and offered amenities such as an auditorium, kitchen, library, bowling alley, and a billiard hall.  Today, Comerica Park stands where the clubhouse used to be.

Cindy Flynn is a teacher, writer and photographer who resides in Northern Michigan with her husband and two dogs.  She writes for several blogs and newsletters, including her own My A-Muse-ing Life .