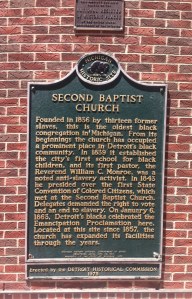 Our Incredible Journey to Midnight: Detroit Underground Railroad Tour returns with our first tour of the season on July 19.  We are thrilled to incorporate an exciting new addition this year – access inside the historic Second Baptist Church safe house.

This is a major coup for us. When it comes to Detroit’s role in the Underground Railroad, you can’t get anymore historically significant than Second Baptist Church which was organized in 1836 by thirteen former slaves. Known as the Croghan Street Station on the Underground Railroad, Second Baptist Church was at the epicenter of Detroit’s anti-slavery movement.

Instead of standing across the street and talking about Second Baptist’s important role in the abolition movement, tour goers get to see it. When they descend the narrow stairway to the dark, secluded basement, they might experience the same sense of trepidation freedom seekers may have felt as they once again had to go into hiding before their long, dangerous journey to freedom was over.

This tour received rave reviews last year. People loved how our actors, portraying historical giants of the era, brought history to life. They loved learning about our rich history, most of which they had not known. Even with all the accolades, I felt we were missing a big part – an authentic physical element to the tour. That’s difficult to incorporate in our city considering most structures of this era are long gone.

Now we are able to have access to the most influential organization of this era that stoked the fires of Detroit’s anti-slavery movement. I get goosebumps just thinking about this!