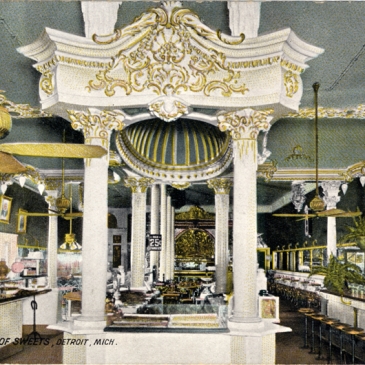 Celebrate National Ice Cream Day with a historic look at how this frozen concoction was dished out in Detroit. … END_OF_DOCUMENT_TOKEN_TO_BE_REPLACED

Casting Call! Notorious 313 Detroit’s Original True Crime and Ghost Tours – the tours that made news around the world – are back! We need *Superstars* to join our team. Do you possess a flair for drama and love to be the center of attention? Can you weave a spell-binding tale from a few facts? Think … END_OF_DOCUMENT_TOKEN_TO_BE_REPLACED

While you’ll see a few brave souls battling the elements during inclement weather, during warm weather months, Detroiters – on bikes – hit the streets en masse. Cycling in the city on bike isn’t a new phenomena. An affinity for two-wheeled transportation dates back to the 19th century.  Cycling in the City: Detroit Bike History … END_OF_DOCUMENT_TOKEN_TO_BE_REPLACED

Thoroughly enjoying my latest read, Wicked Washtenaw County: Strange Tales of the Grisly and Unexplained by local author James Thomas Mann. Only half-way through this 120 page book, but I’ve already learned some interesting new historical tidbits. A) An Ann Arbor resident and convicted murderer who was sentenced to death by execution (1843) may have been … END_OF_DOCUMENT_TOKEN_TO_BE_REPLACED