Explore southeast Michigan and allow our region’s storied past to unfold! 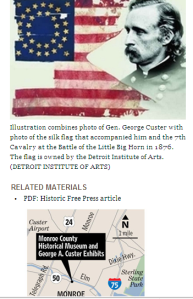 134 years ago today  (June 25)  George Armstrong Custer and members of the 7th Cavalry were killed at the Battle of the Little Big Horn, the DIA announces it will sell the Custer guidon that is part of their collections.

An interesting article announcing this  is featured in today’s Detroit Free Press. See the link below. The article provides an interesting account of how the DIA acquired the flag as well as some information about the famous General.

As a burial detail surveyed the carnage a few days later, Sgt. Ferdinand Culbertson discovered a tattered swallow-tail American flag, known as a guidon, hidden beneath a dead soldier. He picked it up, folded it and squeezed it into his pocket.

Four years later, according to an 1895 Free Press report headlined “Memento of a Massacre,” the first written document of the flag’s history, Culbertson gave it to Rose Fowler, whose husband was a military man. After Mr. Fowler died, his wife married another soldier and retired to southwest Detroit.

Rose Fowler Riedel sold the flag to what then was called the Detroit Museum of Art in June 1895 for $54 — $50 came from a board member and $4 was raised in a public campaign.

Several years ago, while working on the Custer Celebration Committee, we tried to obtain the guidon to exhibit. Unfortunately it was too expensive to insure.

The article explains how the DIA came into possession of the flag.

In 1895, the museum was still something of a cabinet of curiosities, including mounted animal heads and model racing sloopsstates.

Many of those mounted animal heads may have been donated by General Custer himself. Custer, an avid outdoorsman, was an experienced taxidermist.  He and former Detroit Mayor Kirkland C. Barker started were members of the Detroit Audubon Club and Detroit Scientific Society, the forerunner to today’s DIA.

Read more about Custer’s Detroit Audobon Club and Detroit Scientific Society connections in an interview I conducted some time ago with Donald P. Schwarck.