Where the “real crime” is not taking this tour!

The tour that made news around the world is back for the third year! We have three cool tours to fright & delight. If you like your history on the sinister side, these tours are for you! 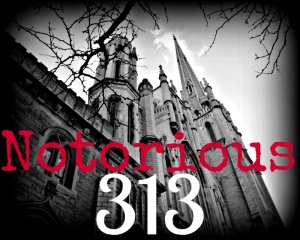 Straight from the heart of the Motor City, the true crime/ghost tours you’ve been dying to take are finally here!

Ripped from the headlines of Detroit’s past, and not so distant past, this chilling look at the city’s sinister side reveals a reality that’s much more frightening than fiction. Join us – if you dare – for this spirited expedition through downtown or midtown Detroit where we unmask macabre tales of depravity, rage, retribution, corruption, sadism, torture and pure evil that lurk below the surface of this historic city.

Beautiful by day yet eerily haunting at night, Detroit’s 300-plus years of history and mix of gothic, neoclassic, and modern architecture create an ominous setting for scary stories of misconduct, murder, misfortune, mayhem and mysticism.

A tour of Detroit’s sinister side wouldn’t be complete without dabbling into the occult and supernatural. Perhaps, we’ll be the lucky ones to raise master magician Harry Houdini from the dead or spy the ghosts of Michigan’s Boy Governor or Detroit’s patron saint.  Do the ghosts of those who died tragically, whether victims of foul play, horrible accidents or deadly diseases, still wander the streets? Can Detroit’s misfortune be attributed to an evil spirit who has a history of wreaking havoc? Find out on these tours!

Popular haunted houses and ghost tours, with their manufactured fright, are great fun and entertainment. They pale, however, in comparison to these terrifying true crime stories wretched from the headlines of Detroit’s past. It’s these vile and ghastly stories of brutality committed by real people – not ghosts and goblins – that will come to haunt your thoughts and plague your dreams.

Disclaimer: Tour may not appropriate for young children – or the faint of heart! In the end, it’s your call!

Hometown History Tours representative will be on site one half hour prior to start of tour tour. To insure everyone has a quality experience, ADVANCE REGISTRATION REQUIRED. Space permitting, we take same day reservations.

Notorious 313 – where the “real crime” is not taking this tour!

From Belle Isle to Eight Mile, down Woodward Avenue – an original American byway and site of the nation’s first mile of concrete highway, to Gate 4 of Ford’s infamous Rouge Plant bridge to the Gateway to Freedom at the river’s edge, Hometown History Tours reveals the stories of Detroit that beg to be told.